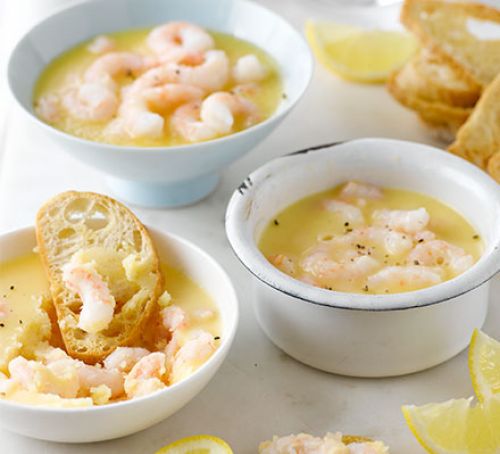 The notion of potting brown shrimps (the kind that are indigenous to the shallow waters around Britain) is one of a raft of old-fashioned ideas that are finding favour with a new generation focused on fresh, local and seasonal foods.

How do you pot shrimps? The place that is synonymous with the process is Morecambe Bay. The way they traditionally do it there is to heat up some good butter (which might be clarified, according to taste) with cayenne pepper, nutmeg and mace, add the cooked, peeled shrimps and warm through. Adjust the seasoning (some might add lemon juice), then spoon into pots, press down and put in the fridge. When set, more melted or clarified butter is poured over the top to form a thick seal before the pots go back in the fridge. Elsewhere, people might just mix the cooked, peeled shrimps with spices and a little lemon juice, pack them into ramekins, scatter with chopped herbs, then pour the melted butter over the top before chilling. It’s not easy to find brown shrimps locally, however, and who has the time to peel them? Which is where traditional potting companies come into their own.

What’s so traditional about it? At James Baxter & Son in Morecambe, they have been potting shrimps since 1799. “The process hasn’t changed,” says manager Mark Smith. The shrimps are caught locally and boiled in sea water on board the boats; the majority are hand-peeled, often by fishermen’s wives, and cooked in English butter with a secret mix of spices. “I’ve been here 19 years and I still don’t know the recipe,” says Smith. They are then put into tubs, sealed with a thin layer of butter, chilled and dispatched. On the north side of the bay, shrimps have always been caught with nets rather than boats. These are the shrimps potted by Morecambe Bay Shrimps, started by fisherman Les Salisbury of Furness Fish. Though the shrimps are now peeled by machine, everything else is done the old way, using local dairy butter.

Are there other variations on the recipe? Forman & Field, the online marketplace for specialist producers, sells an award-winning version prepared in its own kitchens by Roux-brothers-trained chef Lloyd Hardwick. He uses small, sweet, pink shrimps, rather than brown ones, which are cooked in clarified butter with spring onions, lemon and mint. The only concession to traditional spicing is a touch of mace. “It’s a classic marriage, which just gives spice to the shrimp,” says Hardwick.