Want to whip up some sauce for your evening meal, make some homemade soup for a tasty lunch, or put together a smoothie for a healthy snack? If so, you’ll need a blender, but don’t go assuming that a standing blender is best. Here are just a few reasons why foodies love immersion blenders.

Cleaning out a standing blender isn’t the most enjoyable thing in the world; they’re heavy, deep, and have plenty of little nooks and crannies in which food debris can hide. Immersion blenders are far easier to clean, and some can even be popped right into your dishwasher. Better yet, you can blend in the same pot you cooked in, which cuts down on the number of things you need to clean.

Standing blenders are a little limited. They can only hold up to a certain capacity, and they can’t be used for extremely hot liquids. An immersion blender can blend any capacity, and you can use them even with hot liquids. You can also use an immersion blender with very small containers that would have been tricky to pour into a standing blender.

In most kitchens, counterspace is at a premium, and even cupboard space isn’t exactly accommodating. Taking a large standing blender can often be tricky, so why not pick an immersion blender instead? They take up barely any room, so you can simply toss yours in a draw when it is no longer being used. Immersion blenders are also a lot lighter, so you can take one to someone else’s house when you need to cook.

It’s something of a running joke in TV shows and films that standing blenders are extremely noisy. This isn’t such a big deal if you live alone in a detached house, but you can really start to annoy other people in the house – not to mention your neighbours – if you run your blender all the time. In contrast, an immersion blender is almost silent. This is because the motor is encased within the handle. This means that all the sound made by the motor is distributed into whatever it is you’re making. 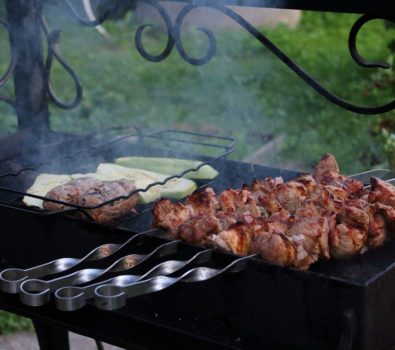